This article was originally published by The Age.

Pining for home: Resistance to the office return is completely natural

If you recoil at communal toilets, and your water cooler chat is awkward, and if you’re struggling with the return to the morning rush and routine, you’re far from the only one.

As Melburnians return to their offices after almost a year of working from home, some may be discovering the once-mundane rituals of work, even those we longed for in the darkest weeks of 2020 lockdown, have become surprisingly difficult.

There is a lot to be said for working from home.

But experiencing degrees of bodily and emotional resistance to returning to our places of work needn’t be a source of shame, organisational psychologists say. It does not mean you’re lazy or a bad member of the team. In fact, it’s completely natural.

“We have to be gentle with ourselves, and one another,” Dr Michelle Pizer said.

“Because I tell you, if I had to put on something that had a tight waist, forget it. I’ve been wearing tracky dacks and Ugg boots for 12 months. I work for myself, so I’m not rushing back to the office, especially while my clients are still happy with current arrangements.

“People are very adaptive and it won’t take too long. But the resistance is very understandable. Everyone is going to be different.”

Melbourne’s non-essential workplaces are now allowed to have 75 per cent of their employees on site, though few office buildings in the CBD could claim this figure with any regularity. 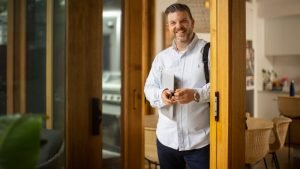 Luke Fossett, of GoCardless, has had his own challenges in getting back to office life. But rather than return to pre-pandemic normal, he is embracing change. CREDIT: SIMON SCHLUTER

A survey by The Property Council of Australia conducted in January, when private-sector workplaces could have 50 per cent capacity, showed fewer than a third of Melbourne’s office workers had returned to their desks.

“I don’t wear shoes that often any more. It struck me the other day that I used to put on shoes every day.”

He said academic studies about pandemic-enforced working from home showed people were generally more productive and happier when given greater hour-by-hour autonomy. But he also warned that autonomy, if it meant prolonged physical distance, had implications for relationships, rapport and trust – in the workplace and broader social network of the CBD.

Luke Fossett, GoCardless head of sales for Australia and New Zealand, returned to the office in January. He has recognised the lingering habits of working from home in himself and his 14 staff.

He personally misses the simple things of home working: bare feet under the desk, lunch with his wife, cricket in the background, and the airconditioning set to his personal taste.

Clothes he hadn’t touched for more than a year have been retrieved from the bottom of the drawers and the wrong end of the wardrobe. Favoured pants no longer fit. Shirts bought in early 2020 still have tags.

On his first day back at the office six weeks ago, year-long habits and the forgotten hell of inbound city traffic made him 45 minutes late for the meeting time he had set himself.

“I’d got in the routine of letting the kids sleep in and letting them watch a little bit of TV before getting out of the house,” he said.

Rather than try to restore the workplace of old, Mr Fossett chose to embrace the good things of working from home and transport them to the office.

“I’d say the dress code has definitely relaxed – more shorts, more Birkenstocks, more riding the bike in and not having a shower until lunchtime,” he said.

“Little things like having the basketball on in the background and not having designated start times.”

Other new additions to the GoCardless office include table tennis, a dart board and a freezer full of ice-cream.

Staff can turn on a red light mounted at their desk to indicate they’re temporarily off limits for return-to-work chit-chat and catch-ups.

Organisational psychologist Gina McCredie recommended a stocktake of habits – what works for the individual versus what doesn’t.

“Then it’s a case of talking about what success in the next phase is going to look like,” she said. One simple example to ease the return-to-work transition could be moving some houseplants to the desk, she said.

Dr Pizer said employees and employers should be honest with one another about designing a creative and reasonable COVID-normal work life.

“This could be, ‘I’d rather not come in until 10.30 – so I can drop off the kids and go to yoga before I start work – so is it possible to not schedule meetings with me before then?’,” she said.

“If there’s no good reason to be there at a certain time, why does it matter? It’s flexibility as much as the workplace will allow. [But] I think what’s been lost is that relationship capital, and you need to spend time together to build that back up, especially for people who have joined their organisation during lockdown.”