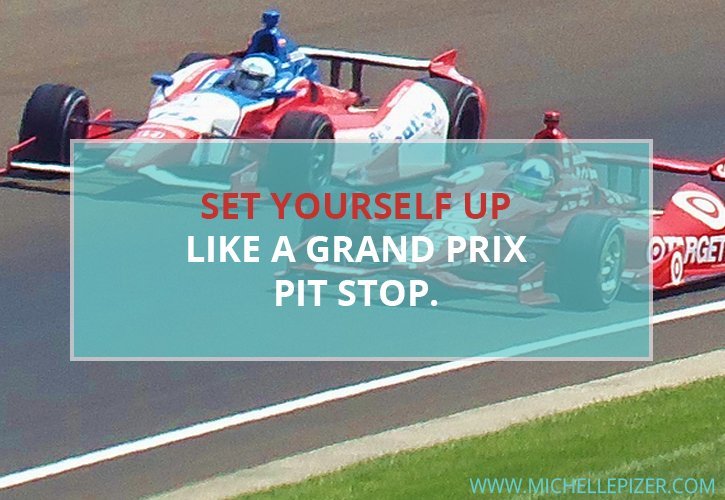 The first Grand Prix of the year was on in Melbourne last weekend. I don’t follow F1, but living in Melbourne… you’d have to be sleeping under a rock not to know.  Especially where I live. I can hear the cars racing around the track. Best of all… I can see the F/A-18 fly-overs from my kitchen window. Top Gun doing the dishes!

Daniel Ricciardo, the Aussie racing for Red Bull, was a serious contender. In the end he didn’t have a podium finish. On the Australian Grand Prix website they posted an article “Should Dan be desperate?” It said: “Our own Dan Ricciardo was sixth – and lapped. That’s unbearable for a front-line driver, a man who won three races in 2014 and was promised better weapons in his fight for more success in 2015”.

Dan’s weapons are his car – they argued. And “you can only drive the car you’ve got”. But who’s responsible for that?

There’s a whole team behind Dan. The pit stops themselves are extraordinary. The mechanics are more like highly-trained athletes who are clear about their role, are experts at what they do and have the resources they need at their disposal. At least I’m assuming that. How else can a pit stop be under two seconds?

I’m telling you this because I think it’s helpful to think about yourself, the car you’ve got and who’s on your team.

Leadership is complex because so many elements have to come together for success. Just like F1.

Dan doesn’t do it alone and neither should you! He’s still considered to have the potential to be one of the greats. He hasn’t got there yet.

Last week I was amazed and delighted at how many of you let me know you are ready to grow. And I know a lot of you are being shy. If you’re ready, don’t put it off. Unless you want another year without a podium finish!

If you’re ready to grow, I urge you again to reach out to me and discuss if you are a fit for my coaching program. I limit the number of people I work with so I can work closely with you to get you to where you want to be.

I have made space available to talk with you, so book a time now. If you’d prefer, simply reply to this email and let me know you’re ready to grow.