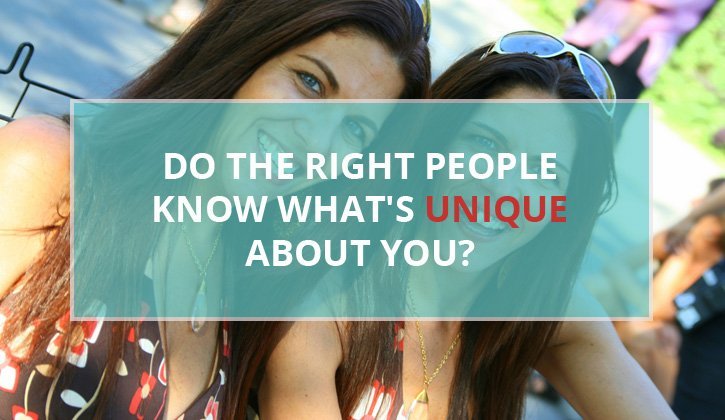 Ever known a set of twins you can’t tell apart? We were office neighbours. Every day I’d pop by to say ‘Hi’ but it took me four years to tell who was who.

They’d had this their whole life.
Just like the Bananas in Pyjamas, these human B1s and B2s grew up with their names embroidered on their school jumpers.

It’s hard enough to get noticed for our uniqueness without being identical twins!

I hadn’t seen the twins for a while – until last weekend.
And last weekend I also saw Pitch Perfect 2.
Featuring the all girl Barden Bellas a capella group.

Two group members, Jessica and Ashley are indistinguishable.
That’s the gag. No-one can tell them apart.
They’re not even sisters, let alone twins!

Why don’t people know who they spend so much time with?

So my Qs for you are:

Are you known for what you want to be known for?
And do the right people know?

It’s not enough to do a good job.
Results matter but they don’t speak for themselves.

You have to speak up for you.

And you want to get the right people speaking for you too (aka sponsors).

Here are three tips to get you thinking about how you can do more to stand out at work in your own unique way.

1. Decide what you want to be known for.
If you don’t other people will decide for you.
They’ll assume you want to do what you’re good at.

If you’re anything like my clever niece, just because you won the Year 12 maths competition doesn’t mean you want to study it at university.

Don’t let anyone else pick what you’re known for.

2. Become a storyteller
My old colleague Kate told me that when she first started dating her Dad gave her this advice:

“It’s your job to be interesting”.

Once you know what you want to be known for, start building a swag of brags – stories and sound bites that are interesting and let people know what you like and are good at.

Next time you just happen to be in the lift with the Chairman of the Board, you’ll be able to pull out one of your lift-worthy brags and know that you were able to make the most of the opportunity.

Do the people 2-levels up know about you (and have you influenced what they know)?

And don’t forget the strength of weak ties.

The Strength of Weak Ties.

A weak tie is where a person you are friendly with knows hardly anyone else you know and vice versa.
The strength in the tie comes from being able to connect you with a whole lot of other people you wouldn’t otherwise know.

So who else do you know (or would like to know).
Internally and externally.

Develop some weak ties.
You never know who plays golf with whom, whose kids go to school together, etc.
You get the drift.

Think about how you can take your career and reputation into your own hands. And I’d love to know what’s worked for you.
Hit reply to this email and let me know.

Of course, if you need a helping hand (and who doesn’t from time-to-time)…

You know what to do ===> Schedule a time with me here.